Spring has sprung in Paris

Greetings, from my happy place. Spring has definitely sprung in Paris.

Now that I've been in Paris for a few weeks, I'm beginning to see it differently. For instance, I don't spend half my time with my head in my map. Rather I spend it gazing at the blooming flowers trees. 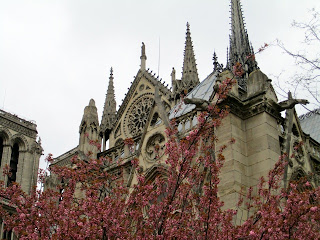 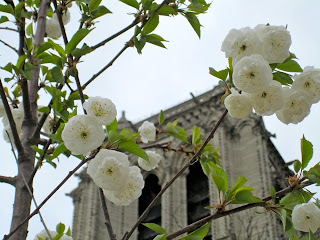 Spring at Notre Dame Cathedral is lovely.
I'm also not getting lost as often... unless someone talks to me. Then I'm completely lost.

I don't spend all my time in touristy areas either... except for my local café on my semi-touristy rue to gaze lovingly at my butcher friend, with whom I had my first real French conversation the other day. He doesn't make it easy, this learning French. He speaks less English than I speak French, which means he, unlike others I've met, is not piping in with full blown English the minute he hears my accent. 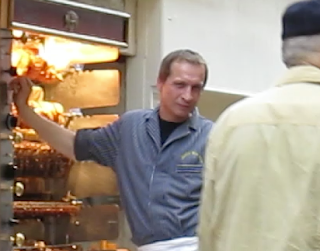 I beam with recognition. I know what belle means.

Through some sort of miracle, I am able to ask him how long he has worked here and if he likes it.

He's on his third year of working on that very perch, selling meat and potatoes. "One year good. One year bad," he says. I also ask him how long he works each day. He works "to... (this is the pause where he struggles with his English words)... night." This is followed by him miming the sun going down. I then amaze him with my superb French counting skills. "Sept? Huit? Neuf?" Seven? Eight? Nine?

He beams with recognition. "Huit." We take a deep breath together and smile. Comprehension.

Then there is either silence because I have no more French words left in me, or an interruption because someone comes along to buy something from him. That's when I end our language immersion class by saying the same thing each day.

He smiles and says in English, "Tomorrow."

Then I go home and spend time listening to my French language podcast and wondering what conversation I can piece together for the next day.

French. It's a process.

But I'm still at it. And so is he. We'll see how it goes. It's amazing that this entire conversation has taken us two weeks. The first week was all smiles and Bonjour. Ca va? The second week was both of us stammering through what would be covered in the first five minutes at a cocktail party if we both spoke the same language.

But there is beauty in this very slow process of learning a language and about each other. We linger in our smiles to let each other know that we're still here, still willing to muddle through a sentence or two each day. We let each sentence sink in. His name is Christophe.

By now his butcher coworkers (shown below) notice when I sit down at the café. I see them look over at me, then they shoot pointed looks at him. She's here! Elle est ici! He waves hello. They wave hello, all with grins for days. I wave back and get out the book that I'm pretending to read. 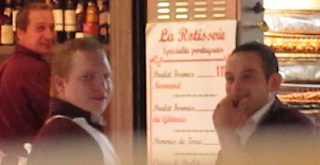