I felt a lot more French before I got to Paris.

Now, after being here five weeks, I have been informed, politely, by every French person I meet that, no, I don't qualify to be French. Here is how they tell me...

I walk into a store and say Bonjour in a pretty good accent. They say Hello.

Then in fully blown English, I say, How did you know I was English?

They smile sheepishly and don't answer.

I think it's because I smile. I'm a bit too cheery and enthusiastic to pull off being French. And I refuse to wear nylons. That's what I'm telling myself anyway.

Or maybe it's because I shrieked like a little girl when THIS horrifying thing arrived at my table:

Make no mistake, I haven't been treated unkindly. Everyone is super nice, except sometimes perhaps in a seething Nice-to-tourists resentful kind of way.

But then again, I'm a tourist. So there.

I've been reading this book to feel like someone understands the frustrations of not exactly being very French when one is in Paris for more than a week long vacation: 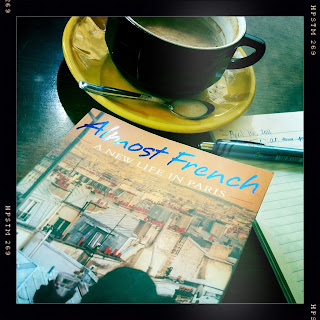 In Almost French: A New Life In Paris, Sarah Turnbull, an Australian, writes the story of the first few years she lived in Paris with her Parisian boyfriend. Basically, like in Quebec, the French are the French and if you're not born French, you're not French so just deal.

This is in steep contrast to many cultures, like mine, that embrace multiculturalism. I take it even further to go to spiritual centers of all faiths like Agape International Spiritual Center and the Self-Realization Center.

You could say I'm sort of religious about multiculturalism.

Turnbull's book has been like a comforting friend who sits with me at the café to inform me with kindness and humor about all the culture around me that my language skills and general know-how do not permit me to access.

In the end, I have accepted that I am simply not as French as I thought I could be.