Castles, beer and shady run-ins with Communism. That's eastern Europe for you. Christophe and I filled one book bag each and took off for Prague.

First, a brief history.
Let's start at Prague Castle, which was a grand palace where kings ruled for a long time. Then some wars, marriages and politics happened. Eventually, the country landed in the hands of the Austro-Hungarian Empire and the Hapsburg Monarchy. Then it was volleyed over to the Communist Soviet Union after WWII in 1948. Totalitarian bullying ensued for over 40 years until 1989, after the Berlin Wall fell, when Czechoslovakians said, "WTF, USSR? You suck. We is outta here." And the Velvet Revolution began, a peaceful demonstration, largely held by students,  that resulted in the Czechs freeing themselves from the USSR, Communism, and all that drab business of conformity and lame ass lameism. In 1993, Prague became the capital of the new Czech Republic, the world came to visit and the streets became lined with tchotchke shops hawking matryoshka dolls, ashtrays and fake fur hats.

But enough about that. Let's get to the beer.
Every hour in Prague is beer-o-clock. The country drinks more beer per capita than any other in the world. And I understand why. The secret ingredient is the water. Yumbo water gurgling from pure mountain streams. So a typical lager is delectable carbonated barley and hops glory.

Christophe and I arrived at the airport in the late afternoon. After a moment of Oh-fuck-I-wish-I'd-researched-how-to-get-downtown-from-the-airport, we found an airport shuttle that dropped us off smack dab in the middle of the action. After asking the driver to point at exactly where we were on the map, we oriented ourselves, found a currency-exchange place, and walked straight into this little house of Czech worship: 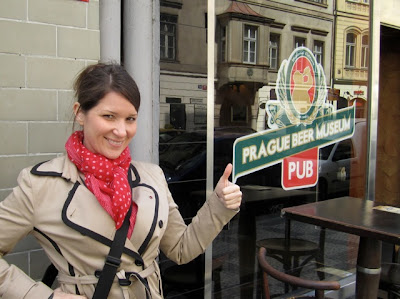 And so began our study of Czech culture.

Inside was a gang of 20-something dudes from Orange County, California, partaking in some wax-on-wax-off beer pong training. We would see the likes of these guys in the morning, sporting water bottles and looking like this: 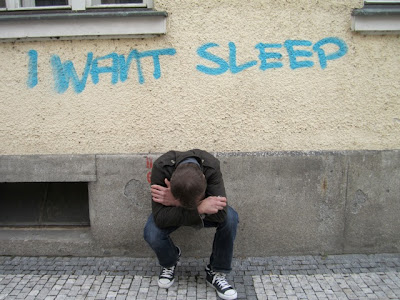 The Prague Museum Bar has 30 regional beers and a booklet describing each one in sexy and scintillating detail:

Koute na Sumave is "pretty much where it's at when it comes to Czech Pilsner-style beer. Beautifully golden, topped with a rocky head that clings around until the very last drop is gone."

Weizenbier is "A perfectly fermented golden amber. This English style beer has a medium-sized creamy head, a bouquet of malt, hops and grass, and a full caramel taste that is pleasantly sweet."

Mazlicek is "Amber with a truly thick head, this lager tastes of candied fruit and honey." 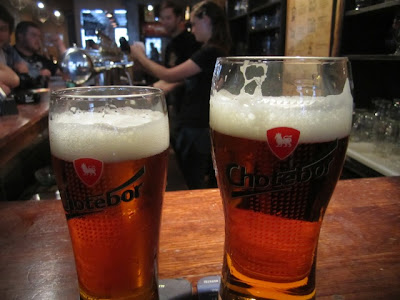 After a lengthy study of Chotebor, we moved on to the next house of worship: 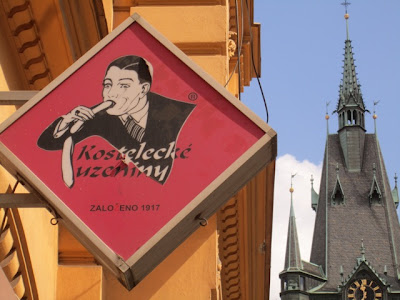 You just can't make this up, folks.

Eastern Europe is a big ol' sausage fest and eastern Europeans like Christophe can tell the difference between them all. To me, there are two types of sausage: Those that make me burp and those that do not. 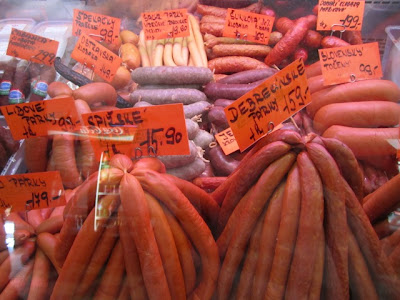 I can't believe I used to be vegan.

Tomorrow, we storm the castle.